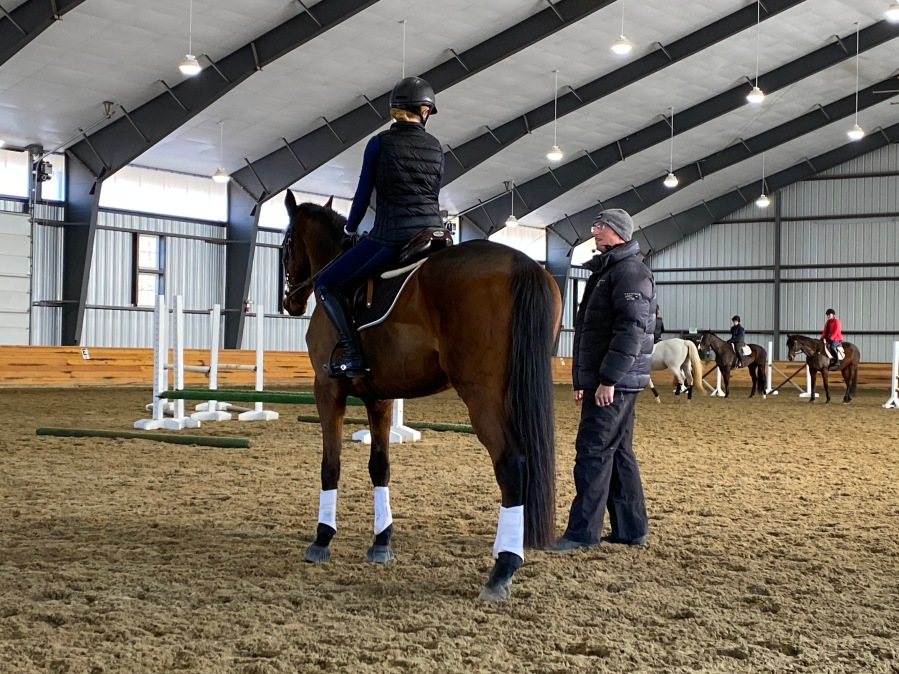 About a month ago, I saw an ad for a Doug Payne clinic being held at Oldfields School. I knew that I had to do whatever it took to be able to go.

I’ve always wanted to ride with Doug, but I have never seen any clinics with him nearby. Oldfields is about 30 minutes away from me, so it couldn’t have been a more perfect location. As a high school student, the cost was intimidating, but I decided that it would be the perfect Christmas present. When people ask me what I’d like for Christmas, I can never think of specific ideas, and honestly I’d rather have this riding opportunity than new clothes or the latest Apple product any day!

Of course, it’s never as easy as just signing up and going to the clinic. As most eventers know, horses somehow always seem to develop a mysterious lameness two weeks before an event. I guess Murphy caught the drift, and after some initial concern panic it was determined that he had an abcess. Thankfully the clinic was far enough away that he would still be fine to go after some time off. Although it felt like time was being taken away to prepare for the clinic, I am so grateful that it was just an abscess and not something more! And, Murphy is not a horse to lose fitness quickly, so we were safe there.

The days flew by and before I knew it, it was the weekend before the clinic. The clinic was in two days, and the high temperature for the first day was 32 degrees. But at least no snow! I sat out my many layers of clothes and was as ready as I would ever be.

On the first day, I walked into Oldfield’s pristine indoor arena and saw that most of the jumps were set fairly low. There was an assortment of small exercises, including an oxer with placement poles, cross rail bounces, and an angled one stride. I was hoping that we would be doing grids because I know that Doug has a lot of exercises that Murphy and I would benefit from.

The very first exercise was an oxer that was maybe two feet high with placement poles in the front and back. We jumped it on a figure eight on what was about a 20-meter circle, which proved to be more difficult than expected when it came to making the tight turn. After Doug saw Murphy jump it a couple times, he told me to stop and go on a 10-meter canter circle and work on counter bending to straighten his shoulders, which is something that I already work on with my trainers. Side note: there was a ton of overlap in what Doug said about Murphy and me at the clinic, and what my trainers at home say, so I was very happy about that.

Doug also used a visual example of how Murphy’s shoulders turn by putting my crop in the pommel of the saddle and showing that no matter which way his head turns, he is still going to go in whatever direction that the crop, or his withers and shoulders, are turned. This was helpful for me to visualize because Murphy can act a little crazy about tossing his head around trying to evade my hands, but I really need to focus on his shoulders.

After that warm-up, Doug added more to the exercise and we did the same oxer, four strides to another vertical, then a sharp turn to three one-stride bounces, and a change of direction to do the whole thing backwards.

I liked all of the courses Doug came up with because they were very symmetrical, which was nice to jump everything fluidly in both directions. The last two exercises we did included an angled one-stride and a bending line to the angled one stride, focusing on straightness and accuracy. It was harder to execute than it looked!

There was a lot of trotting into fences, too, which I liked because that’s one of Murphy’s weaknesses. However, it was also good for the greener horses, because the exercises were somewhat complex and technical, but all of the fences were small enough to make it less intimidating. One of my favorite quotes from Doug over the two days was, “Don’t be afraid to introduce complexity early, just do it at a height where the consequences are insignificant.”

The overall theme of the first day was to slow it down when in doubt, and be precise about what you’re asking the horse. For me, Doug reinforced that I need to use a lighter seat since I tend to drive with my seat by instinct even if I don’t mean to, and I need to strengthen my leg by keeping it down and my knee off the saddle.

When we walked into the indoor on the second day, there were lots of new exercises set up. It was still only a few degrees above freezing, but it felt warm compared to the first day!

We warmed up over the same small oxer with placement poles, and I was pleasantly surprised because Murphy jumped it well in a nice collected canter.

From there, we moved on to a bending line from the oxer to a vertical, then a sharp turn to three low bounces on a curved line, which I think Murphy was a little confused with at first – he got up to it and then was like, wait, what is this?? –  then a change of direction over a vertical, but it had two blocks set up on the front and backside of it to force you to jump straight over it. Murphy jumped it a little awkwardly the first time and knocked over the block on the backside. Whoops! Next was a sharp turn to the same bounces on a curved line, which Murphy jumped through better, and then back to the first two jumps. I remember after doing this exercise I was thinking, well, we were off to such a great start, but that definitely did not feel so smooth!

One thing I noticed about Doug’s exercises is that everything looked deceivingly simple from the ground. However, you could not get away with making a course look effortless unless you were straight and had your horse completely on your aids. I also enjoyed having to make some tight turns.

Murphy had one runout when Doug put the liverpool up to a bigger oxer. I think that he lost some focus since he had a lot of stopping and starting, and it was just a super quick mishap where I didn’t give Murphy enough direction. The first thing Doug said when it happened was that as soon as you have a runout, you need to halt as quickly as possible and leg yield away from the direction they tried to runout. He also said that I needed to fix my line coming in, because although I didn’t put him on a crazy angle, I did not come in as straight as I should have. We repeated the exercise, fixing my line, and Murphy was totally fine.

One horse was having a lot of trouble with the liverpool and Doug got on him. This was honestly one of my favorite parts of the clinic because I got to see Doug’s expertise at work, close up. He made it crystal clear to the horse what was allowed and not allowed, and did so in an efficient, calm and controlled way. What stood out to me the most was that Doug managed to deal with a problematic horse and never once lost contact in the bridle. Seeing that up close made it clear why he’s able to bring horses along as quickly as he does.

By the end of  the second day, I was pleased with Murphy. He jumped well through some challenging exercises and he was quite professional.

To wrap up the clinic, Doug talked a lot about how the horses need to be quick on their feet. They need to respond immediately with tight turns to jumps, which means the horse always has to be looking for what’s coming next.

Also, the rider must be 100% clear in what they’re asking and expecting from their horse, because if you don’t give clear direction they will not understand what you’re asking.

As for me, I came away from the clinic with some key points and homework. I need to:

On that past point, Murphy and I usually find it easy to move up to distances. He loves a long spot! We’ve worked hard in the last year or so to get him more confident and powerful from short spots. Doug suggested I focus on staying at a good canter pace, and be more aggressive with my leg at the base of fences so he jumps out well and I can fix his canter at the base of the fence rather than 5 strides before or after the fence. He said that short spots are fine, but Murphy has to be animated and pop up off the ground quickly, which comes from me putting my leg on.

I loved how Doug taught, because he was low key and cool, calm and collected about everything, but he clearly still has high standards that he will hold you and your horse to.

One interesting thing – to me, anyway – is that Doug often uses percentages when he teaches, as in, “You need about 20% more leg coming to that fence” or “Increase the contact by 10%.” It took me a bit to grasp this since it didn’t make  sense in my brain, but for Doug, being an engineer, I’m sure that’s just how his mind works. Either way, I really liked Doug’s focus on precision and details.

Overall, I was pleased with how Murphy jumped and the advice I got from Doug. A lot of it was overlap from what my jump trainer, Jenny, already tells me, but it’s just confirmation from another professional’s eye that we are working on all the right things!

Confessions of a Concert Addict

Tales of a teenage music lover

Zen and the Art of Baby Horse Management

Are We There Yet?

Over-analysis of my life with horses

A Yankee in Paris

No animals were harmed in the making of this blog...

The world is best viewed through the ears of a horse.