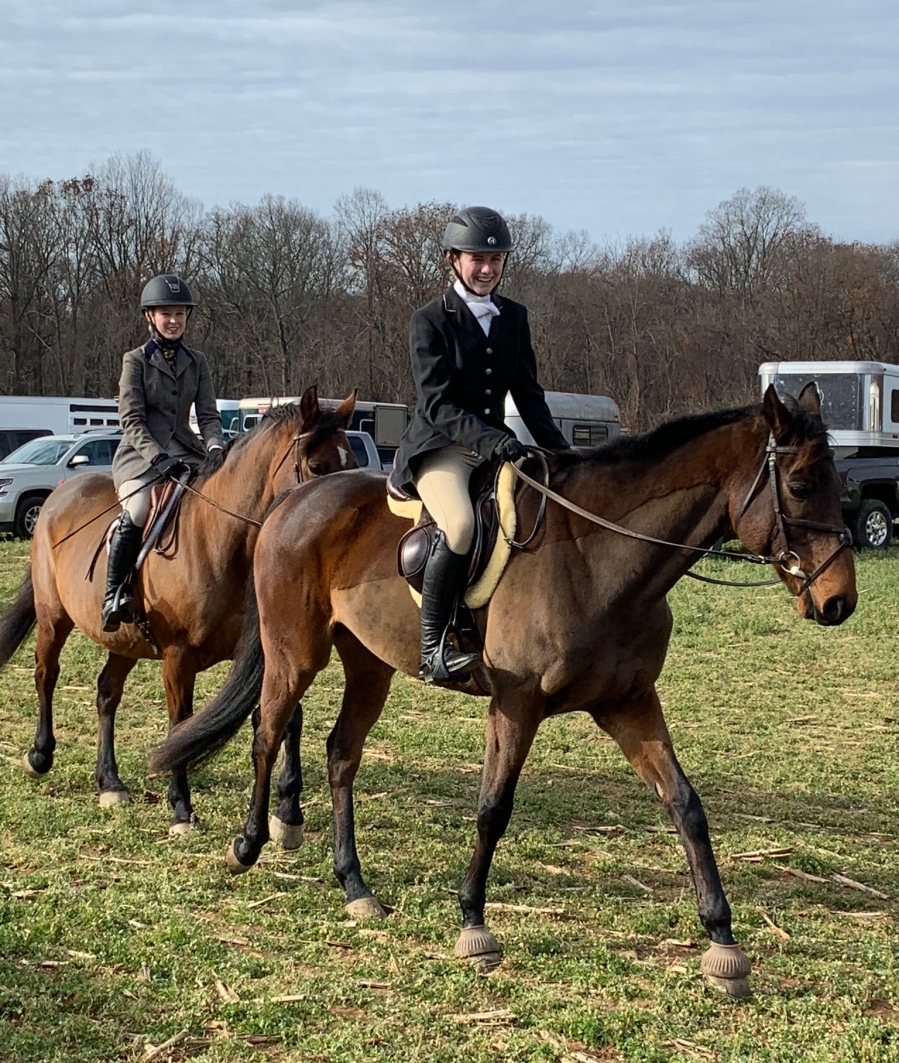 It’s the time of year that most people associate with being thankful. But it’s also fox hunting season! I just went on my first foxhunt the day after Thanksgiving, and it made me realize how thankful I am for what I have.

I had no idea how Murphy would react when we arrived and tacked up among everyone else in a corn field full of trailers.

Murphy went hound walking and cubbing once, but that was over a year ago. We did a hunter pace once about two years ago, which is like a variation of a foxhunt, and he grew his tall giraffe neck when he saw all the horses galloping in groups off in the distance. I thought that I was going to have to get off of him he was being so wild, but he was fine as soon as he trotted out into the field to start. I’ve learned that standing still is not his strong suit, and movement helps him focus.

I figured it would either go really well, or really bad, and if he was bad, we could just return home early. Basically, I was going to be thankful if we were able to get a saddle on him and if he calmed down once he started galloping.

I borrowed a solid black jacket and cleaned all my tack (which is pointless – it’s only going to get covered in mud again) and hoped for the best!

We got to the hunt early in hopes of tacking up Murphy before all the commotion. The sun was shining and there was no wind – we got lucky! There was no misbehaving from Murphy, so between that and the weather, we were off to a good start.

My friend who I was hunting with came over and was already on and walking, but her horse was not handling the commotion nearly as well as Murphy (never thought I would write that in a sentence), so I walked around with her. More horses and ponies started swarming around the field. There were so many ponies. Murphy LOVES ponies – I don’t know what he sees when he looks at ponies, but he’s obsessed with them. Then the hounds came pouring out of their trailer, their noses already hard at work, and Murphy didn’t bat an eye.

I started to let down my guard a little bit. Maybe this would go fine!

Finally, we got started in the second field. The footing was good, and Murphy was having fun. He just wanted to go fast! When we were trotting, he insisted on slowly cantering instead. He even stood fairly still when we had to stop. I wanted to go in first field, but my friend’s horse was still being strong, so we figured that wasn’t the best idea.

Regardless of what I did or didn’t get to do, I was so happy with how Murphy handled himself. A year or two ago, he probably could not have kept it together as well as he did.

I am lucky that I have a horse that I can take out and dabble in a little bit of everything, from fox hunting, jumpers, hunters, eventing, combined tests, dressage, trail riding, Pony Club rallies and whatever else I decide on a whim I want to try.

When people ask me about what I do with Murphy, it can be hard to explain how he has influenced my junior career because he hasn’t taken me to the upper levels of competing where I originally wanted to be. I find myself struggling to find the right words to describe our accomplishments without going on a tangent, and I usually end up saying that I do eventing, but I’m not competing right now, which only brings on further questions.

What I should tell people is that he has been the horse that I can take out on hacks alone and to Pony Club rallies. He has taken me to my first foxhunt, first rally, first overnight horse show (568 miles away), and first training level combined test. He also took me through all of my Pony Club ratings, from D-1 to C-2.

I’ve gained so many tools from his stubbornness that will help me in my future riding career. He is the one I can count on to always keep me on my toes and motivate me to keep learning, and I really do owe a lot of my success, both in riding and in life, to him. I hope that during this season of thankfulness, you remember to thank your horse, whether they’re the one that made all your goals and dreams possible, or if they’re the one you can count on to always enjoy a trail ride.

One thought on “‘Tis the Season for Giving Thanks… and Foxhunting”

Confessions of a Concert Addict

Tales of a teenage music lover

Zen and the Art of Baby Horse Management

Are We There Yet?

Over-analysis of my life with horses

A Yankee in Paris

No animals were harmed in the making of this blog...

The world is best viewed through the ears of a horse.